Spectacular new images of the Milky Way have been released to mark the completion of the APEX Telescope Large Area Survey of the Galaxy. The APEX telescope in Chile, a collaboration between the Max Planck Institute for Radio Astronomy in Bonn, Germany, the Swedish Onsala Space Observatory, and the European Southern Observatory, has mapped the full area of the Galactic Plane visible from the southern hemisphere for the first time at submillimetre wavelengths (between infrared light and radio waves) and in finer detail than recent space-based surveys. The pioneering 12-metre APEX telescope allows astronomers to study the cold Universe: gas, dust and other celestial objects that are only a few tens of degrees above absolute zero. 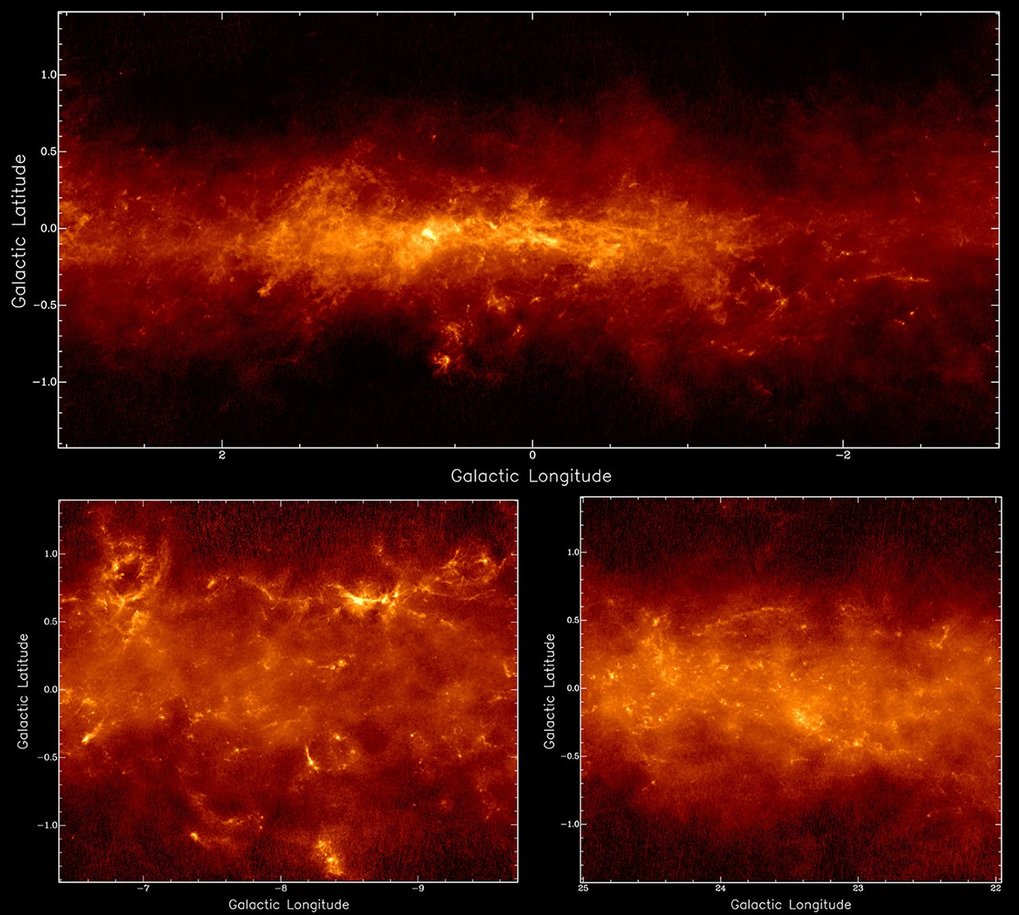 Three areas of the Galactic plane as seen by the APEX LABOCA camera merged with large-scale images from the Planck … [more]
© ATLASGAL-Konsortium/Csengeri et al. 2016, A&A 585, A104.

APEX, the Atacama Pathfinder EXperiment telescope, is located at 5100 metres altitude on the Chajnantor Plateau in Chile’s Atacama region. The APEX Telescope Large Area Survey of the Galaxy (ATLASGAL) took advantage of the unique characteristics of the telescope to provide a detailed view of the distribution of cold dense gas along the plane of the Milky Way galaxy. The complete survey includes most of the regions of star formation in the Milky Way.

The ATLASGAL maps cover an area of sky 140 degrees long and 3 degrees wide. This survey is the single most successful APEX large programme with more than 69 associated science papers already published, and its legacy will expand much further with all the reduced data products now available for the full astronomical community.
At the heart of APEX are its sensitive instruments. One of these, LABOCA (the LArge BOlometer Camera), the largest such detector in the southern hemisphere, was used for the ATLASGAL survey. LABOCA, built at the Max Planck Institute for Radio Astronomy (MPIfR) in Bonn, Germany, measures incoming radiation by registering the tiny rise in temperature it causes and can detect emission from the cold dark dust bands obscuring the stellar light.
“If we combine the high spatial resolution ATLASGAL data with observations from ESA’s Planck satellite, the resulting data reach space quality with a 20 times higher resolution”, says Axel Weiß from MPIfR. This allows astronomers to detect emission spread over a larger area of sky and to estimate the fraction of dense gas in the inner Galaxy. The ATLASGAL data were also used to create a complete census of cold and massive clouds where new generations of stars are forming.

“ATLASGAL provides exciting insights into where the next generation of high-mass stars and clusters form. By combining these with observations from Planck, we can now obtain a link to the large scale structures of giant molecular clouds”, remarks Timea Csengeri, also from MPIfR, responsible for combining the LABOCA and Planck data.

The APEX telescope recently celebrated ten years of successful research on the cold Universe. It plays an important role not only as pathfinder, but also as a complementary instrument for ALMA, the Atacama Large Millimeter/submillimeter Array, also on the Chajnantor Plateau. APEX is based on a prototype antenna constructed for the ALMA project, and it has found many targets that ALMA can study in great detail.

“ATLASGAL has allowed us to have a new and transformational look at the dense interstellar medium of our own Milky Way”, says Leonardo Testi from ESO, who is a member of the ATLASGAL team and the European Project Scientist for the ALMA project. “The new release of the full survey opens up the possibility to mine this marvelous dataset for new discoveries. Many teams of scientists are already using the ATLASGAL data to plan for detailed ALMA follow-up.” 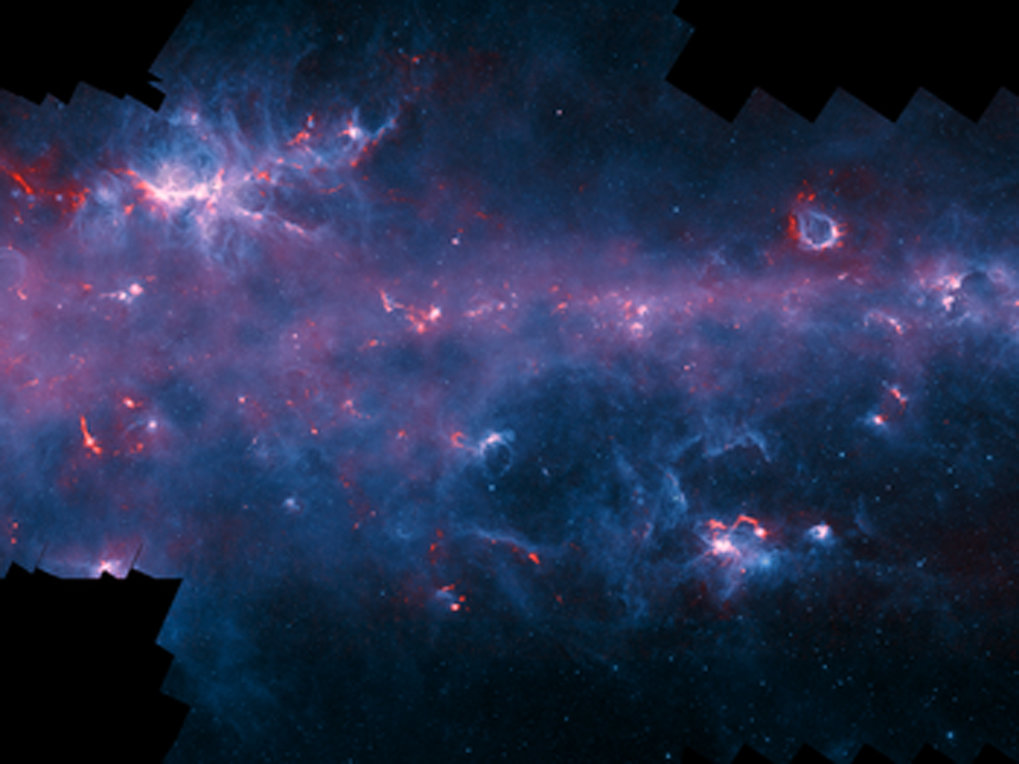 Image of the Milky Way in the direction of the constellation Scorpius with the NGC 6334 (Cat’s Paw Nebula, upper left) … [more]
© ESO/APEX/ATLASGAL consortium/NASA/GLIMPSE consortium

APEX, the Atacama Pathfinder Experiment, is a collaboration between the Max Planck Institute for Radio Astronomy (MPIfR), Onsala Space Observatory (OSO), and the European Southern Observatory (ESO) to construct and operate a modified prototype antenna of ALMA (Atacama Large Millimetre Array) as a single dish on the Chajnantor plateau at an altitude of 5,100 metres above sea level (Atacama Desert, Chile). The telescope was manufactured by VERTEX Antennentechnik in Duisburg, Germany. The operation of the telescope is entrusted to ESO.