The solar system was formed from a protoplanetary disk consisting of gas and dust. Since the cumulative mass of all objects beyond Neptune is much smaller than expected and the bodies there have mostly inclined, eccentric orbits it is likely that some process restructured the outer solar system after its formation. Susanne Pfalzner from the Max Planck Institute for Radio Astronomy in Bonn, Germany and her colleagues present a study showing that a close fly-by of a neighbouring star can simultaneously lead to the observed lower mass density in the outer part of the solar system and excite the bodies there onto eccentric, inclined orbits. Their numerical simulations show that many additional bodies at high inclinations still await discovery, perhaps including a sometimes postulated planet X.

The findings are published in the present issue of „The Astrophysical Journal“. 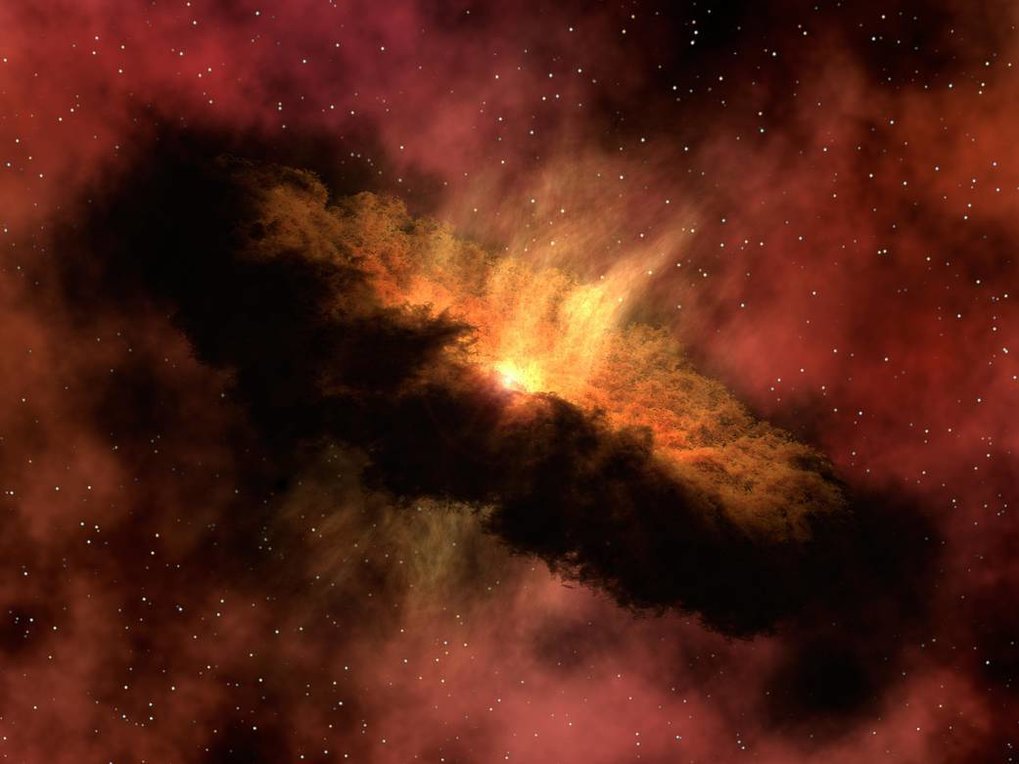 Artist’s concept of a solar system in the making with a protoplanetary disk surrounding a young star.

A near catastrophy billions of years ago might have shaped the outer parts of the solar system, while leaving the inner regions basically untouched. Researchers from the Max Planck Institute for Radio Astronomy in Bonn and their collaborators found that a close fly-by of another star can explain many of the features observed in the outer solar system. „Our group has been looking for years at what fly-bys can do to other planetary systems never considering that we actually might live right in such a system”, says Susanne Pfalzner, the leading author of the project. “The beauty of this model lies in its simplicity.”

The basic scenario of the formation of the solar system has long been known: our Sun was born from a collapsing cloud of gas and dust. In the process a flat disk was formed where not only large planets grew but also smaller objects like the asteroids, dwarf planets etc.  Due to the flatness of the disk one would expect that the planets orbit in a single plane unless something dramatic happened afterwards. Looking at the solar system right to the orbit of Neptune everything seems fine: most planets move on fairly circular orbits and their orbital inclinations vary only slightly. However, beyond Neptune things become very messy. The biggest puzzle is the dwarf planet Sedna, which moves on an inclined, highly eccentric orbit and is so far outside, that it could not have been scattered by the planets there.

Just outside Neptune’s orbit another strange thing happens. The cumulative mass of all the objects dramatically drops by almost three orders of magnitude. This happens at approximately the same distance where everything becomes messy. It might be coincidental, but such conincidences are rare in Nature.

Susanne Pfalzner and her co-workers suggest that a star was approaching the Sun at an early stage, ‘stealing’ most of the outer material from the Sun’s protoplanetary disk and throwing what was left over into inclined and eccentric orbits. Performing thousands of computer simulations they checked what would happen when a star passes very close-by and perturbs the once larger disk. It turned out that the best fit for today’s outer solar systems comes from a perturbing star which had the same mass as the Sun or somewhat lighter (0.5-1 solar masses)  and flew past at approximately 3 times the distance of Neptune.

However, the most surprising thing for the researchers was that a fly-by does not only explain the strange orbits of the objects of the outer solar system, but also gives a natural explanation for several unexplained features of our Solar System, including the mass ratio between Neptune and Uranus, and the existence of two distinct populations of Kuiper Belt objects.

“It is important to keep exploring all the possible avenues for explaining the structure of the outer solar system. The data are increasing but still too sparse, so theories have a lot of wiggle room to develop”, says Pedro Lacerda from the Queen’s University in Belfast, a co-author of the paper. “There is a certain danger that one theory crystallises as truth, not because it explains the data better but because of other pressures. Our paper shows that a lot of what we currently know can be explained by something as simple as a stellar fly-by.”

The big question is the likelihood for such an event. Nowadays, fly-bys even hundreds of times more distant are luckily rare. However, stars like our Sun are typically born in large groups of stars which are much more densely packed.  Therefore, close fly-bys where significantly more common in the distant past. Performing another type of simulations, the team found that there was a 20%-30% chance of experiencing a fly-by over the first billion years of the Sun’s life.

This is no final proof that a stellar fly-by caused the messy features of the outer Solar System, but it can reproduce many observational facts and seems relatively realistic. So far it is the simplest explanation and if simplicity is a sign for validity this model is the best candidate so far.

Simulation of the stellar intruder scenario for a mass of 0.5 solar masses and a perihelion distance of 100 astronomical units or 15 billion kilometers for the perturbing star (three times the distance between Sun and Neptune). … [more]