The 100-m radio telescope of the Max Planck Institute for Radio Astronomy (MPIfR) is located in a valley near Bad Münstereifel-Effelsberg about 40 kilometers southwest of Bonn in the Eifel area. Three astronomical trails in the surroundings of the observatory, named “Planetary Walk”, “Milky Way Walk” and “Galaxy Walk” illustrate the complete cosmic distance scale from nearby planets to distant galaxies. The connection between two of them, the Planetary Walk and the Milky Way Walk, is established by the common target station “Sirius”.  In the scale of the Milky Way Walk, Sirius and our sun are neighbouring stations only 90 cm apart. In the scale of the Planetary Walk, the real distance of 8.6 light years between sun and Sirius amounts to 11,000 km, corresponding to the distance between two of MPIfR’s radio telescopes, the 100-m Effelsberg telescope in Germany and the 12-m APEX submillimeter telescope in Chile. 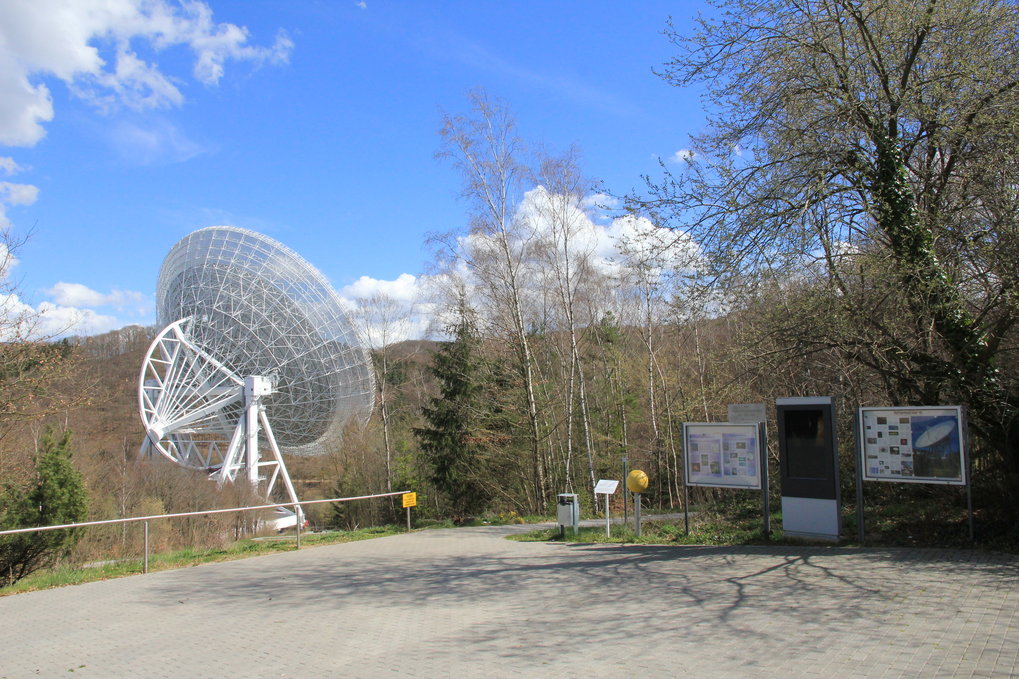 The 100-m radio telescope seen from the courtyard of the visitors’ pavilion. The yellow ball marks the station “Sun” of … [more]

Planet trails (in German: “Planetenwege”) are a nice way to illustrate cosmic distances and sizes within our solar system. They usually consist of nine or ten stations: the sun and eight planets, sometimes also including the dwarf planet Pluto. At the widely used scale of 1 : 1 billion the trail has a total length of almost 6 kilometers (distance between sun and Pluto). The sun scales to a diameter of 1.4 meters, and the Earth to 1.3 cm in a distance of 150 meters from the sun.

The Planetary Walk at the Effelsberg Radio Observatory is a bit smaller in size. Scaled 1 : 7.7 billion it covers the walking distance of about 800 meters from the parking area to the visitors’ pavilion where talks about radio astronomy and the telescope for groups of visitors are taking place. It starts with the dwarf planet Pluto at the parking lot and continues from there to the inner solar system – the rocky planets between Mars and Mercury and the sun itself can all be found at the courtyard of the visitors’ pavilion (Fig. 1).

Table: Stations of the Planetary Walk at the Effelsberg Radio Telescope

Two additional walks, the Milky Way Walk and the Galaxy Walk, are extending the cosmic distance scale far beyond the solar system. The Milky Way Walk covers a total distance of 4 kilometers from the village Burgsahr in the nearby Sahrbach valley to a viewing spot immediately in front of the giant dish of the Effelsberg telescope. At a scale of 1 : 1017 (1 : 100 quadrillion) this corresponds to 40,000 light years through our galaxy. The Milky Way Walk includes a total of 18 stations from the outer regions along the sun to the Galactic centre at a distance of 25,000 light years from the sun.

The Galaxy Walk covers the truly large distances in the Universe. It has a total length of 2.6 km, starting in the forest behind the Effelsberg radio telescope and leading to a nearby hut (Martinshütte: the “hut at the edge of the Universe”). At a scale of 1 : 5 x 1022 (1 : 50 sextillions) it includes a total of 14 stations, the most distant one with a light travel time of 12.85 billion years. In other words: we observe light from that distant galaxy (named J1148+5251) coming from a time less than 1 billion years after the formation of the Universe.

In order to connect the three astronomy trails at Effelsberg there are two target stations included in two of the trails. The station “Andromeda Galaxy M 31” is contained in both, Milky Way Walk and Galaxy Walk. It is the closest large-scale spiral galaxy, a twin of our Milky Way at a distance of 2.5 million light years. For the Galaxy Walk that scales to 50 centimeters; Milky Way and Andromeda galaxy are the first two stations only 50 cm apart. At the scale of the Milky Way Walk, however, it corresponds to a distance of 250 kilometers.

The station “Andromeda Galaxy” is mounted at the “Haus der Astronomie” in Heidelberg, 250 km away from Effelsberg. This house is indeed shaped like a spiral galaxy, contains a 1 : 100 scale model of the Effelsberg telescope in its interior and the plaque “M 31” of the Effelsberg Milky Way Walk at the main entrance.

The connecting element between Planetary Walk and Milky Way Walk will be Sirius, the brightest star in the night sky. Sirius is a nearby star at a distance of only 8.6 light years from the sun. Both stations (Sun and Sirius) can be found on the Milky Way Walk: close to the village Binzenbach in the forest, the two plaques are just 90 centimeters apart.

For the Planetary Walk it is a different story: the distance of about 9 light years to Sirius scales to 11,000 kilometers! At the same scale, the dwarf planet Pluto is less than 800 meters away from the Sun. For the space probe Voyager 1, the most distant device built by mankind, it is less than 3 km in that scale, but even for the nearest star, Proxima Centauri, the distance is already more than 5000 km!

Coincidence by chance: the required value of 11,000 km for Sirius nicely meets the distance between two radio telescopes of the Max Planck Institute for Radio Astronomy, the 100-m radio telescope at Effelsberg and the APEX telescope in the Atacama desert in Chile which is  jointly run by the MPIfR, the European Southern Observatory ESO and the Swedish Onsala Observatory.

The station “Sirius” of the Planetary Walk is mounted directly at the APEX site on the Chajnantor plateau 5100 m above sea level in the Atacama desert (Fig. 2). Sirius is the brightest star in the night sky, and it is visible from both sites, Effelsberg in Germany as well as APEX in Chile.

Since there is no general access to the APEX telescope on Chajnantor, Sirius is also presented in the nearby village San Pedro de Atacama, 2500 m above sea level. The San Pedro office of Alain Maury’s San Pedro de Atacama Celestial Explorations (SPACE) on Caracoles 400-2 presents the plaque in three different languages (Spanish, English and German).

“It is great that Sirius enables us to close the last remaining gap between our astronomical walks at the Effelsberg telescope”, concludes Norbert Junkes from MPIfR who regularly uses the cosmic distance scale in his talks for visitor groups at the Effelsberg site. “From the planets to stars and star forming regions in our Galaxy and further on to other galaxies, almost to the edge of the Universe – our three walks cover the complete range.” 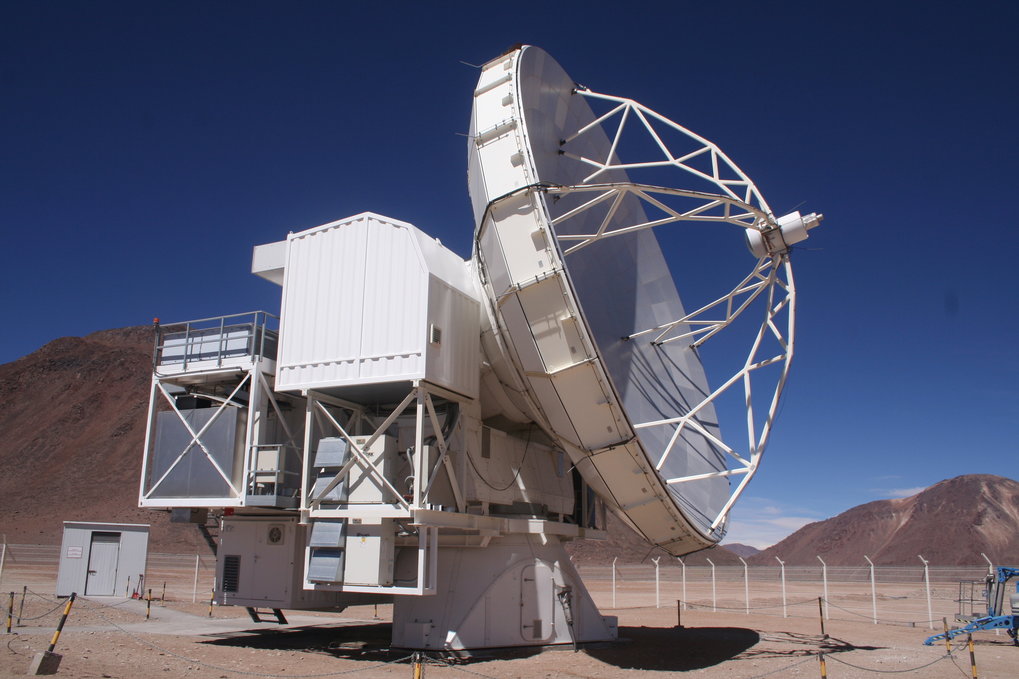 The Atacama Pathfinder Experiment (APEX) at the Chajnantor plateau in Northern Chile, 5100 m above sea level. The linear … [more]